While new restaurants open quite often, Broad Ripple’s soon coming restaurant taking over the former Qdoba is anything but. Usta, which is planning to open by at the end of April, is actually relocating from Bloomington, Illinois where it had operated for more than nine years.

The restaurant closed at the end 2020 after the building it was in sold. Owners Sakin and Gulay Demir and their sons John and Matt decided to relocate with hopes to grow the Turkish and Mediterranean restaurant with additional employees and potential locations.

As reported by IBJ, Usta’s menu is comprised of some Turkish specialities like marinated cubes of chicken or beef with grilled eggplant in a heavy cream sauce with herbs known as hunkar begendi and pan-fried zucchini and carrots with parsley, herbs and tzatziki sauce known as mucver.

The menu also has the standard offering of hummus, kebabs, falafel wraps and gyros.

The Demir’s decided on Broad Ripple after talking with local business owners. “It’s a vibrant community that likes to try different cuisines,” Matt Demir explained to the IBJ. “They all encouraged me to open up a business here and they told me I could be successful here.” 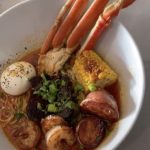